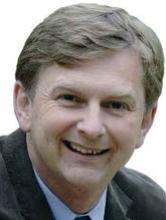 I am currently a Professor of Physical Geography in the School of Geographical Sciences, Bristol University. Previously, I was at Reading University, Meteorology Dept. and was the UK’s first Professor of Earth System Science. In 2007 I was awarded a Royal Society Wolfson Merit award and in 2014 was awarded the Milutin Milankovic Medal from the EGU for his research on past climate change.

I have published almost 200 peer-reviewed papers on aspects of past, present, and future climate. Some relevant highlights of his research include:

I have been a lead PI on the first phase of the Grid ENabled Integrated Earth system model project (GENIE), which developed a new Earth System model of Intermediate Complexity and was also the lead PI on the QUEST project “Climate and Biogeochemical Cycles during the Last Deglaciation”. I was also the founding leader of the Bristol Research Initiative for the Dynamic Global Environment (BRIDGE). At NERC, I have chaired the HPC committee for more than 8 years, served as a member of the National Capability Advisory Group, and was one of the first members of the peer review college pool of chairs. I am also a non-executive director of a carbon management company Greenstone.