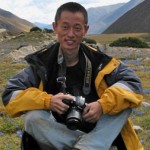 I am an associate professor and is working in Xishuangbanna Tropical Botanical Garden, Chinese Academy of Sciences (CAS). My research focuses on  using Cenozoic fossil floras in China to understand biodiversity, biogeography, palaeoclimate and palaeoecology. I have published more than 40 peer-reviewed papers on aspects of fossil plants, palaeoecology, palaeoclimate and climate modelling.

Currently, I am the principal investigator of the Paleoecology Research Group in Xishuangbanna Tropical Botanical Garden.