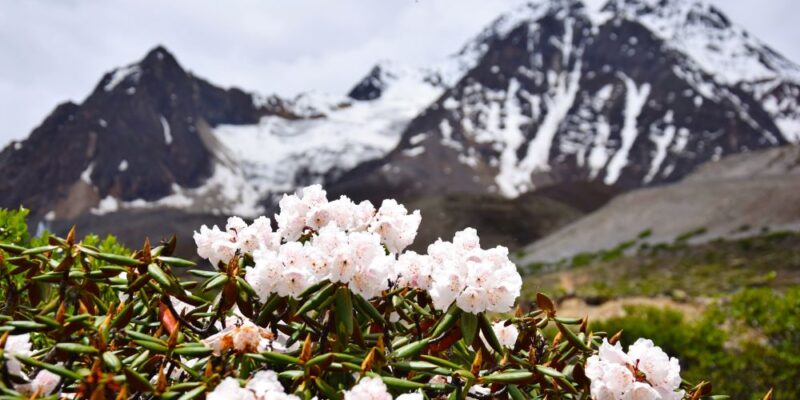 Out this week in the journal Science member of the UMBRELLA team, Prof. Robert Spicer, has publihed new and exciting research examining the originsn of our modern plant diversity. Many readers may even be familiar with many of these plant specieis as they are also common in many of our back gardens.

An international team who conducted this study has discovered that highly diverse plant life found in China can be traced back to the formation of ancient mountain ranges.

Researchers examined the plant life in China’s Hengduan Mountains, the Himalaya Mountains, and the Qinghai-Tibet Plateau. Using DNA to build family trees of species, they learned that the diversity of plants in that region today, and the original source of many of our garden plants, can be traced back to mountain ranges 30 million years ago, and monsoons that came later. It’s a concrete example of how climatic and environmental changes influence life on Earth.

The study focuses on plants growing above the treeline (called the alpine zone) in the Hengduan Mountains of southwestern China. Researchers wanted to find out how plants are distributed in the alpine regions of the Hengduan Mountains, Himalaya, and Qinghai-Tibet Plateau, and how they got there in the first place. To figure it out, they turned to phylogenetic reconstructions: essentially, using DNA and key pieces of fossil evidence to piece together the plants’ family trees, going back tens of millions of years.

Robert A. Spicer, Emeritus Professor of The Open and co-author on the paper, said:

“The Tibetan region hosts one of the world’s great biodiversity ‘hotspots’ but it is under threat from climate change and other forms of human disturbance. Normally we would use fossils to understand ancient vegetation history and so how to best conserve this precious ecosystem, but alpine plants growing high in the mountains simply do not get preserved, so we had to try a different approach.

“This study blends using DNA to reconstruct plant ‘family trees’ with ‘hard core’ geology in order to reconstruct landscape evolution across the Tibetan region. As with most modern science, advances come with the marriage of disciplines and the offspring of this marriage is a new understanding of when and how one of the world’s great biodiversity ‘hotspots’ was formed.”

The team compared the DNA of different plant species that live in the region, determining how closely related they were to each other and how they evolved. If you have DNA sequences for a variety of different plants, by looking at the differences in their DNA and using fossil plants as benchmarks for how long it takes new species to arise, you can make an estimate as to how long ago their common ancestor lived and figure out the family tree that makes the most sense.

Evolution of the mountain ranges

In this study, the research team were able to trace the origins of alpine plants in the Hengduan, Himalaya, and Qinghai-Tibet Plateau and found that they represent the world’s oldest temperate alpine area. Many of the plants first evolved in the Hengduan Mountains. Then, as the Indian tectonic plate collided with Asia, slowly creating new mountains, a bunch of new habitats formed up the mountains’ sides, and in the valleys below. As the new mountains formed, the region began to experience more intense monsoons, possibly because the mountains altered the prevailing winds, creating new weather conditions.

Rick Ree, a curator at Chicago’s Field Museum and co-author on the paper, said:

“The combined effect of mountain-building and monsoons was like pouring jet fuel onto this flame of species origination. The monsoon wasn’t simply giving more water for plants to grow, it had this huge role in creating a more rugged topography. It caused erosion, resulting in deeper valleys and more incised mountain ranges.

“The theory is, if you increase the ruggedness of a landscape, you’re more likely to have populations restricted in their movement because it’s harder to cross a deeper valley than a shallow valley. So, any time you start increasing the patchiness and barriers between populations, you expect evolution to accelerate.”

And that’s exactly what the team found in reconstructing the plants’ genetic family tree: as the landscape grew more rugged over time, the now-isolated populations of plants veered off into their own separate species, resulting in the biodiversity we see today.

In addition to showing how geological and climate changes over the last 30 million years affect today’s spread of plants, the study has implications for better understanding the climate change the Earth is currently experiencing. Ree adds:

“This study sheds light on the conditions under which we get rich versus poor biodiversity. Mountain ecosystems tend to be very sensitive to things like global warming, because the organisms that live there are dependent on a tight range of elevation and temperature. Understanding how historical environmental change affected alpine plants twenty million years ago can help us predict how today’s climate change will affect their descendants.”

For more on the study read the paper in the Science journal.