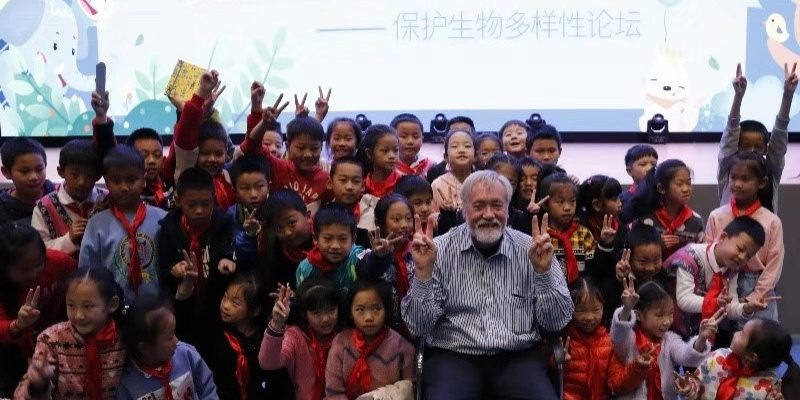 Shortly after arriving back in China, our very own Bob Spicer was asked to speak at a Kunming primary school around the general topic of Tibet, Monsoons and Biodiversity in Asia. He was told beforehand that the children would be aged around 10 and that the talk was part of an afternoon of interesting the children in biodiversity issues generally, so there were other shorter presentations to individual classes on why, for example, sharks needed to be protected and not hunted for their fins, and to encourage the children to join field excursions. What Bob was not expecting in a provincial primary school was world class presentation facilities including a giant high-resolution LED screen in an arena-sized hall. Neither was he expecting the 10 year olds would be the wonderful audience they turned out to be.

Unlike many meeting venues the AV equipment worked flawlessly! The children filed in to the hall class by class wearing colour coded class uniforms and the familiar red neck ties seen on school children across China. They were incredibly well behaved and sat through 30 minutes of a presentation in English (with Mandarin translation) glued to the screen. They clearly enjoyed the talk judging by the gasps and squeals of delight giant images of the often rather bizarre flora and fauna of SE Asia appeared and movies of fossil collecting, and reconstructions of past Tibetan landscapes, told the story of the UMBRELLA mission.

At the end of the talk Bob was surprised to see a forest of hands raised enthusiastically to ask questions (unlike some university students, both here in the UK and in China). Despite the size of the audience the children took the microphones and asked clearly, some in perfect English, questions that could only be described as ‘research grade’. As an example one question was “ If Tibet had always been as it is now, and not evolved as you say, how different would the Asian biodiversity be?”. Fortunately that is the kind of question that can be tackled by our biodiversity-enabled climate models, but one that we had not thought to ask in quite that way! Alex and Paul will have to try and this in their climate models.

Clearly investment of resources in primary level education in China is paying off. The children are obviously proud to be part of something valued by the state, as evidenced by the investment in the next generation, and repay the respect they are afforded with commitment to learning. If this experience was in any way typical, Chinese science has a bright future ahead of it.

The UMBRELLA team can only hope that the next generation will be as inspired to wanting to understand and protect the natural world around them as much as we are. If the enthusiasm shown by these primary school children is anything to go by, the future is in safe hands.