Part of the recent fieldwork involved studying the sediments mapped as mid Miocene in the Jinggu Basin (23.5°N, 100.7°E). The geological evolution of Yunnan and the southeastern margin of Tibet is complex but appears to include Cenozoic extrusion of the Indo-China block as a result of the India-Asia collision. As much as 350 km of northwestern Indochina extruded along the Red River Fault accompanied by Oligocene rotation and deformation (Li et al., 2017 a & b). These large scale movements led to the formation of numerous depositional basins, now filled with a rich palaeontological record, that are the focus of our work. 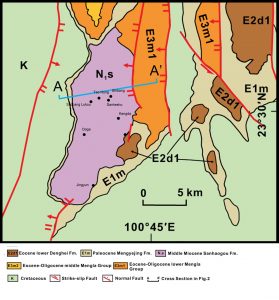 Fig. 1. Geological map of the Jinggu Basin modified from Li et al. (2017) showing sample localities referred to in the text.

The sediments within the Jinggu Basin immediately around the town of Jinggu, are mapped as middle Miocene. The basin-fill is deformed into a syncline bordered by Cretaceous rocks to the west and Paleogene rocks to the east (Fig. 1). The sections we examined are discussed in ascending stratigraphic order and record an initial deepening of the basin followed by its gradual infilling. More complete details of our work will be given in forthcoming publications.

This section was not logged in detail but consists of coals overlain by several tens of metres of lacustrine clays, silts and sands. Above the coals the most abundant leaf-bearing lacustrine units are situated approximately 20 m below a possible ash horizon.

This section lies within the eastern part of the basin mapped as middle Miocene but is situated very close to the contact with Paleocene (E1m) deposits.

The distances between this site and those in the central part of the middle Miocene Basin-fill makes it difficult to correlate easily. However the mine location is close to the eastern margin of the Miocene sediments, which suggests it may represent the oldest part of the Miocene succession we studied.

The section suggests a deepening basin passing from sands and coals representing a floodplain environment with river channels, separated by densely vegetated interfluve swamps, to a large lake system. The concentrations of leaf material in the middle part of the section suggests some parts of the succession represent near-shore, moderately shallow environments, but within the mine continued subsidence led to deeper water laminated sediments being preserved, largely devoid of leaf material. These laminations are most clearly displayed where a putative ash layer was found in medium to dark grey clays and mudstones (Fig. 3). If this is an ash layer and is dateable then it would tell us when Miocene sedimentation began. 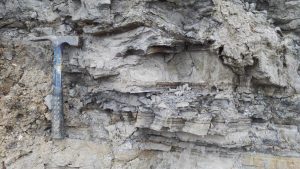 Figure 3. Laminated medium to dark grey lacustrine sediments near a putative ash horizon within the Jingyun mine section.
The colour and lack of bioturbation is indicative of low oxygen conditions where leaves should have been well preserved. Their absence suggests the shoreline was some distance away, again indicative of a lake system growing in aerial extent and depth. If the laminations represent annual cycles then they suggest moderate to strong seasonality in sediment influx/biological productivity.

This section (Fig. 4) records a succession of predominantly laminated medium to dark grey clays and mudstones interspersed with well-sorted fine sands and silts showing minimal graded bedding. This suggests a well-sorted and uniform sediment supply. Some sand bodies such as that at 14.8 m from the bottom of the measured section contain comminuted plant hash (Fig. 5). Leaf fossils are rare but some mostly articulated fish and rare fossil insects occur. 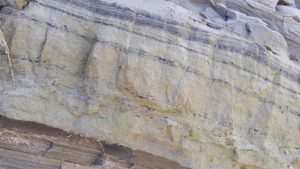 Fig. 5. Highly fragmented plant debris in a layer of fine sand at 14.8 m from the bottom of the Kangda Brickworks measured section.

The laminations on the millimetre scale often occur in bundles separated by beds 20-40mm thick of grey mudstone (Fig. 6). The laminations are largely free of bioturbation but occasionally disturbed by small and large-scale syndepositional slumping (Fig. 7). When not disturbed by sand influxes and slumping, the regularity of the laminations again suggest strong seasonal variations in sediment supply/biological productivity. The lack of bioturbation, rare evidence of current flow such as ripples and/or crossbedding, and a lack of leaf material suggest generally deepwater and largely anoxic conditions far from the shoreline. 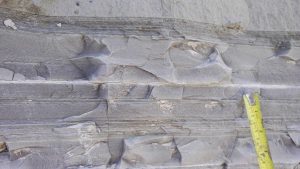 Fig. 6. Laminations at 16.8 m from the bottom of the Kangda Brickworks section. 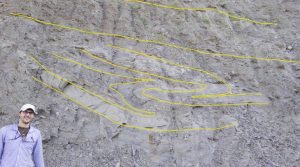 However, the distance from shore was not so great as to prevent periodic sand transport into the basin, and syndepositional slumping possibly triggered by occasional seismic activity, suggest moderately steep sides to the basin. The rare but articulated fish fossils are again indicative of anoxia near the bottom of the lake, but well oxygenated conditions at shallower depths. High resolution sampling (Fig. 8) was carried out between 15.1 and 17.3 m on the measured section. 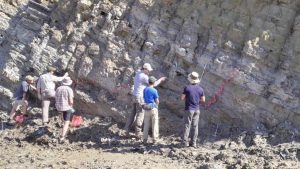 The lower part of the succession contains more sand bodies and thicker sand bodies than higher up section, indicating lake deepening and a receding shoreline with time. Possibly this section records a continuance of the deepening recorded in the Jingyun mine.

This succession is again composed of lacustrine sediments characterised by a high proportion of laminated grey clays and mudstones interspersed by sand bodies. While deepwater facies indicative of anoxia are evident throughout the middle part of the section, the lower parts have a high frequency of sand influxes followed by a lack of laminations and reddening of the sediments between 2 and 7.5 m from the bottom of our measured section. This suggests shallower and more oxygenated conditions. Some bioturbation is evident in otherwise laminated mudstones between 9 and 10 m suggesting a dysoxic, rather than anoxic, environment. Laminations may again suggest seasonal variations in sedimentation rates. Charcoal fragments, indicative of wildfires, demonstrate vegetation dry enough to burn and so perhaps a marked dry season. Above 21 m laminations become less frequent accompanied by an increase in the presence of sand bodies and plant material. This likely represents shallowing conditions, due either to tectonic uplift of the basin floor or an increase in the evaporation/precipitation ratio (drying and a reduction of stream inflow to the basin), or both. Minor syndepositional faulting is present. 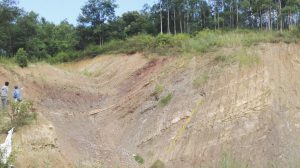 In the upper part of the exposed section, not logged in detail, the sediments again become oxidised and red. This is not a modern superficial weathering phenomenon because these red beds are overlain by grey mudstones and frequent thin sandstones intercalations (Fig. 9). Again this sedimentary package and palaeo-oxidation suggests a further shallowing of the basin as represented at this location. 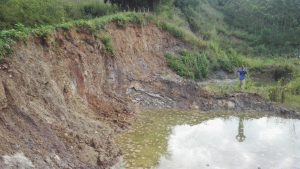 This is a poorly exposed section that was not sampled extensively. The predominant lithologies are light grey to dark grey lacustrine clay and mudstones that are well bedded to laminated. Leaf fossils occur infrequently but the section has yielded a bird fossil. The sediments suggest a moderately deep moderately anoxic lacustrine environment.

This locality consists of two sections. The northeastern section (elevation 975 m) is poorly exposed and steeply dipping to the west. The dip was not measured because the predominant lithology is a fine to medium yellow/beige orange-banded fluvial sand. Bedforms (sub-aqueous dunes) are on a metre scale. The orange decimetre scale bands are extraordinarily regular (Fig. 11). Figure 11 also shows a fining upwards to a grey/green mudstone indicating significant flow reduction over time. The scale of the bedforms suggests a very large river system with regularly fluctuating flow regimes. This could suggest a highly seasonal climate. 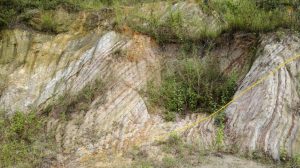 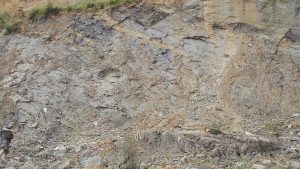 These sections are highly distorted with varying dips. Some may be gravity slumping and some tectonic. Unlike the sections lower in the succession these sediments are indicative of a basin with very little accommodation space. This can be caused by an uplift of the basin floor and/or sedimentary infilling of the basin.

This is the uppermost part of the basin-fill studied. The dip appears constant throughout the section, but part of the section has collapsed on to the road. The lower part of the section consists of well bedded/laminated mudstones, siltstones and fine sands indicative of shallow lacustrine passing upwards to floodplain environments. Exposed bedding surfaces are rippled suggesting shallow water environments. Deposition is apparently regularly episodic (Fig. 13). 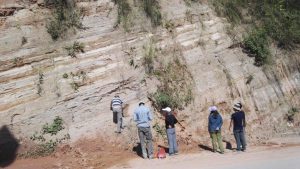 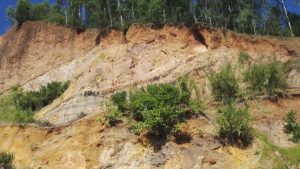 Figure 14. Uppermost part of the Shachang Lukou section showing thin coals/palaeosols overlain by mudstones, which are eroded into by more than 5 m thick red conglomerates.