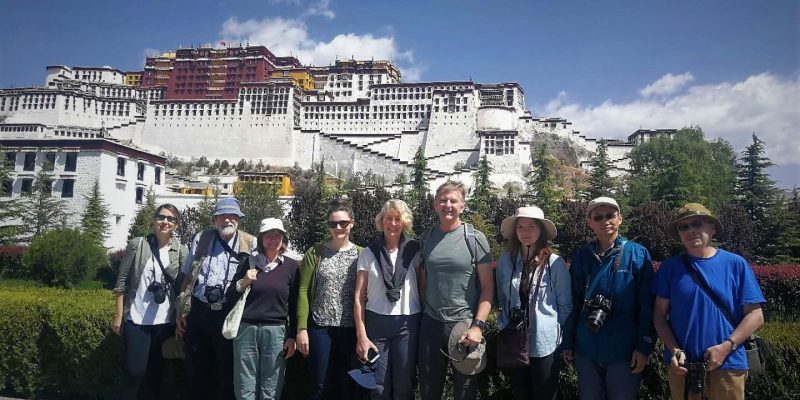 The UMBRELLA team assembled even more of its members leading up to the second leg of this latest Spring 2019 expedition in China, meeting first in Xishuangbanna in Yunnan province and then Beijing before continuing on our journey to Tibet. 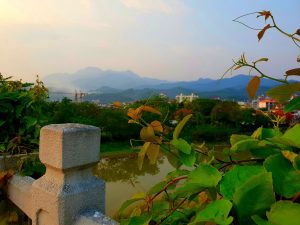 A view from XTBG crossing the river

First stop: Xishuangbanna Tropical Botanical Garden of the Chinese Academy of Sciences in Yunnan province of China. What a treat – a beautiful, tropical, seemingly endless botanical dream. Our colleagues warmly welcomed us, giving us a taste of the local Dai food and of course showing off the exquisite gardens. Vittoria and I borrowed Bob’s little electric scooter and explored the incredible gardens during the mornings before rejoining everyone for work for the rest of the day. The group quickly set to work reviewing recent accomplishments, discussing current projects underway, and, most pressingly, preparing for the upcoming journey to Tibet. 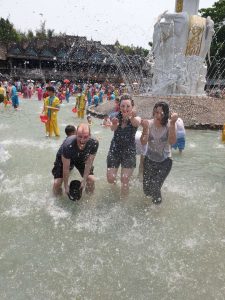 Alex, Cait, and Vittoria in water fight (And Paul, but he took the photo!)

On our way to the airport to our next destination, we stopped in a local village where we experienced singing, dancing, and the unforgettable Water Fight Festival. With the latter, some of the team joined in and laughed themselves silly (at least I did) by the ludicrous pandemonium that ensued (picture below). We walked the old streets with traditional Dai homes, watched the Dai women weaving tapestries (even the smaller ones take about three days to make), and snacked on some of the many dried fruits left out in the sun like pineapple and jackfruit.

That evening, we enjoyed the continuing festival in the city of Jinghong, which was complete with live music, stalls, and street food. It seemed that whole part of the city was completely alive – sounds of people chatting, children laughing, street vendors shouting encouragement to come to their stalls, blaring speakers blasting the current musical act, and the lights from the flashing stage and gentle glow from lanterns. It was beautiful and chaotic, to say the least. 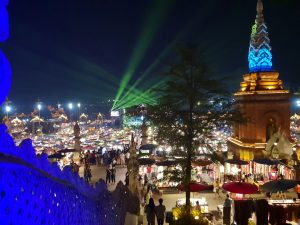 A glimpse into the chaos of the street festival

Second stop: Beijing. We set off to pick up more colleagues for the Tibet excursion at the Key Laboratory of Continental Collision and Plateau Uplift, Institute of Tibetan Plateau Research, and Center for Excellence in Tibetan Plateau Earth Sciences at the Chinese Academy of Sciences in Beijing. It was unfortunately a very short trip, but we had a fascinating day of talks with the group, sharing what possibilities may lie ahead. Paul and Bob both gave great overview talks of their respective expertise. Some students shared their knowledge on the geology of Tibet – a fantastic feat, as anyone who has seen a geologic map of Tibet can tell you. The students then brought some of us around Beijing for the rest of the day to at least give us small sampling of the great city, knowing we’d soon by off again. 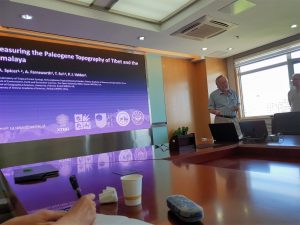 Bob and Alex tag-teaming their talk 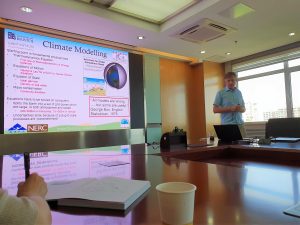 Tibet! We started in Lhasa to give us a couple of days to adjust to the altitude. When even the hotel rooms have oxygen masks, you know it’s no exaggeration that walking up a flight of stairs would leave us out of breath. Luckily, we (for the most part) faired alright – perhaps because we were so distracted by the incredible stoic beauty of the region. We began to see the people, the food, the culture, the deep religiosity, and appreciate how unique Tibet truly is. 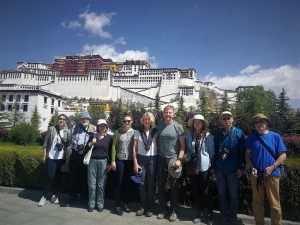 Standing in front of the Potala in Lhasa (Photo credit: Alexei Herman)